A well-attended function was held last weekend, in what was left of the old Diggers Club building. It marked the temporary closure of the Club prior to its re-opening on Lumsdaine Drive in 2018. The last remaining section of the “Old Lady” will shortly be demolished to permit the construction of the final phase of the development. This will include levels of apartments atop a gymnasium and two swimming pools.

Some permanent staff have been relocated to jobs at the Manly Bowling Club (which is owned by Mounties Group) and others are being bussed each day out to the Mount Pritchard Club premises of Mounties. It is intended that when the new Club is completed that these highly trained staff will return.

Work on the residential construction is continuing apace and the Carrington Drive aligned apartments are scheduled to be available for occupation in February 2018. Already the sandstone facings of the apartments are being realised. This section also includes a pre-school facility

Also completed is the major storm water pipe that will remove excess storm water from the site. This will be discharged into the ocean nearby.

FRESHWATER VILLAGE IN A STATE OF TRANSITION.

The combined impact of major construction projects nearby, changes in retailing and high rents has placed the Village in a period of transition.

In a short space of time, the newsagency has closed; a travel agent has moved to other premises in Curl Curl; our two laundry shops have closed and 6 shops on the southern side of Lawrence Street lay empty. Soon our baby health centre will close, and families will have to hop into a car to travel to the Mall for neo-natal and midwifery services. When these services disappear, they never return.

On the plus side, we are soon to get a Super IGA supermarket and the return of Bakers Delight and possibly a new tenant for the current IGA space. 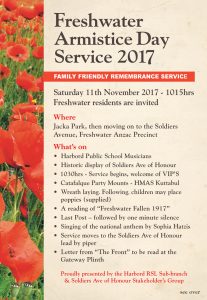 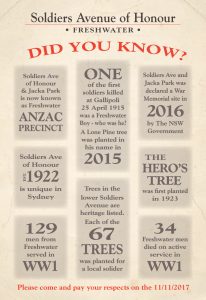 A family friendly remembrance service will be held on 11 November 2017, and a Flyer is attached with details. Each year, our Nation pauses on the 11th hour of the 11th day of November to remember the 60,000 Australians who lost their life in this tragic war.

Did you know that: –

This annual event is organised by the Harbord RSL Sub Branch and the Soldiers Avenue of Honour Stakeholders Group and next year will be the centenary.

The 26“Freshwater’apartments on the former Harbord Growers Site are due to be completed by year end. Already major internal fit-outs are proceeding apace and scaffolding systematically removed.

At 5 Pavilion St, the 6-storey cliff-top apartment block has now assumed its permanent profile.  This should be a welcome improvement on the dog of a building that it replaces.

Liquor and Gaming NSW has advised that the Liquor Licence application by Cellarbrations has been withdrawn.  This was for a packaged alcohol retail outlet in the new “Freshwater” apartment complex (formerly the Growers Market site).

With more than 50 submissions from the Freshwater community opposing the application, along with those of the Northern Sydney District of the Department of Health; Northern Beaches Council and the NSW Police, this is a pleasing outcome. 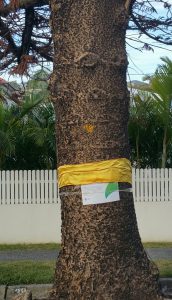 Upon being alerted to the poor state of the tree by a neighbour, we spoke with Northern Beaches Council Tree Preservation Officers. They have been investigating its demise and are of the opinion that it was poisoned by someone.  A note to that effect has been placed on the tree and Council is looking for further evidence and offering a $10,000 reward. The Tree will also be replaced.

The Friends of Freshwater is frankly disgusted at this turn of events. View enhancing at the expense of trees is the stuff of some beach communities where well-heeled individuals feel that they can do as they please.  This has not happened so overtly in Freshwater before and never on a heritage listed tree.

SBS is filming segments for a Series on prominent Australian citizens of Italian background. The Series is entitled “Passionate Italians” and will include a segment on Freshwater restaurant owner and chef, Giovanni Pilu.

His much-lauded restaurant was recently recognised with a National Award for Best Italian Formal Restaurant. The judging criteria for this Award is based on a ranking by consumers of their dining experience. Clearly there are many contented diners.

Giovanni is also known for his campaign to include local produce in restaurant menus and it was fitting that filming of him was partly done in Freshwater Community Garden where gardeners, often from apartments nearby, are growing their own produce.

Fortunately, at the time of filming and despite the record dry, the Community Garden was looking like a green oasis.

Popular Café Calm Owner and Chef, Cedric La Page, is recovering from an horrendous motor bike accident at South Curl Curl. He was thrown from the bike and had various body injuries including two broken wrists, one of which required micro surgery. For a Chef, one’s hands are tools of trade and the accident has forced him away from the Café, while he recovers. 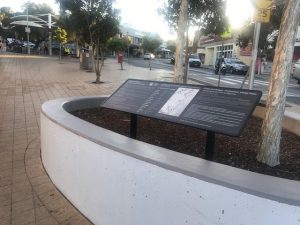 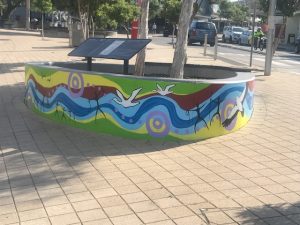 The first of five concrete pods in Freshwater Village Plaza has been the subject of artistic treatment by a well-known aboriginal artist, Leanne Tobin. See photos attached. The other four pods are also to be part of an ongoing public art project. These pods, that currently have a range of functions including as protection for a major storm water pipeline passing underneath, will be used to depict the various phases of the history of Freshwater. This will extend from the millennial occupation by our first peoples; the arrival of our early settlers in the 19th Century; our surfing and Anzac history, and a pod devoted to the future.

A project team with Sean Rout as Chair, and Stacey Berkman, Kent Bull, Tai Ropiha and Peter Harley as members, has been working for the last two years on this project.

On Saturday, September 30, a public launch of the Project coincided with the installation of a painted artwork which depicts Freshwater Creek moving to Saltwater.  This is very apt, given that Freshwater Creek snakes its way through our community and down to saltwater at the Beach. There is also a great deal of local evidence, including middens, to suggest that the Cammaraigal clan used both the environs of Freshwater Creek and Beach as regular sources of food, and cave overhangs for shelter. 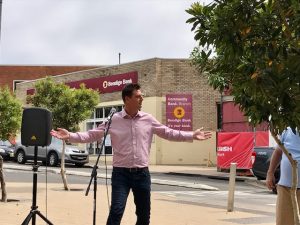 Friends of Freshwater has been successful in gaining a grant from Council to assist with this project, but for its full realisation it will require further crowd-funding.