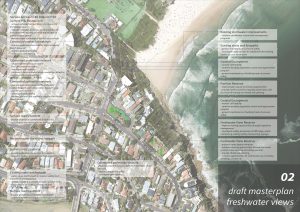 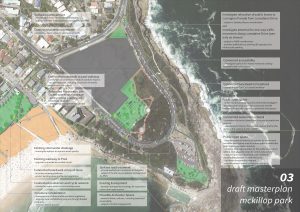 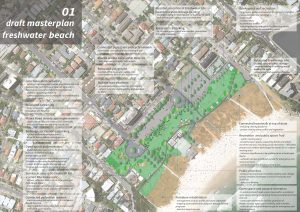 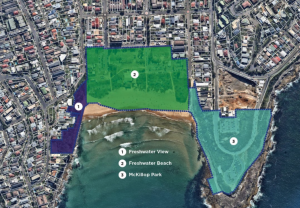 At its meeting on 28 November, Northern Beaches Council approved a recommendation to release its Freshwater Coastal Open Space Master Plan for public comment.

This Draft Plan was prepared by Council staff with input from a project team consisting of reps from Freshwater SLSC, Harbord Diggers, Friends of Freshwater and people drawn from the local community. Funding for its implementation is to be drawn from the Amalgamation funding provided by the State Government.

From the perspective of the Friends of Freshwater, this is a once in a generation opportunity to inject some fresh thinking into the workability and amenity of these spaces.

We have been campaigning for a number of years for the missing link of the Coastal Walkway to be completed from South Curl Curl through to Ocean View Road; the two beachside playgrounds to be upgraded; removal of weed infestation in Undercliffe Reserve, and a Management plan for Freshwater View Reserve.  The current Diggers development also provides the opportunity to have a fresh look at the configuration of McKillop Park and surrounding streets.

It is without doubt that Freshwater Beach and the surrounding public open space forms some of the most stunning sections of the Palm Beach to Manly Coastal Walkway. The park area immediately behind the beach has been developed in an ad hoc fashion as land was acquired by Councils over a period of time, and is dominated by car parking. This dominance compromises the ability of this important space to function in a way that best serves the community.  Additionally, access to the beach area and adjacent headland reserves such as McKillop Park and Freshwater View Reserve, is far from ideal.

Maps of the three principal areas under consideration are attached. They extend from Queenscliff to South Curl Curl.

Public submissions are being received by Council on its website and at drop-in sessions that are being held adjacent to the Kooloora Avenue playground this Saturday, 9/12, from 8-11am, and on Wednesday 13/12 from 8am to 11am. Council can also be contacted on 1300 434 434.

Should you have any concerns about aspects of this plan, we urge you to put your thoughts in writing to Council.

An Armistice Day Ceremony to commemorate those men and women who served in WWI, was held in Jacka Park on the eleventh hour of the 11 November, as it has been done for the best part of a century. More than 400 attended including local dignitaries, defence service personnel and descendants of those who gave service. More importantly, Armistice Day is about recognising the fragility of peace and the impact of war on families. This is as poignant now as it was then.

The lessons of the 5 years of intense war during 1914-1918 still reverberate almost a century later.

In the Freshwater Anzac Precinct of Jacka Park and later in the Soldiers Avenue of Honour there were some magical moments on this day that illustrate the essence of peace and the depth of emotions for forebears long departed.

Pippa Ravenscroft is the 2017 School Captain of Harbord Public School and within a few months, a high school student. She spoke of peace in her own crafted prose at the recent Armistice Day Ceremony.

“Peace is special. So special, that sometimes we don’t notice it, ad take it for granted, as it has always been there. And it hasn’t.”

“But in my lifetime, peace is all I have known”.

“In Freshwater, my generation has grown up in a community that is safe. We’ve never had to worry about living in fear. When you’re not living in fear, you have the freedom to be hopeful about what you can achieve in the future.”

Peace is extremely precious and we have to look after it. We won’t always agree with one another, but if we treat others how we like to be treated, and look at things from other peoples’ perspectives, it could help create a more peaceful future.”

“Future peace lies in our hand and I hope we don’t throw our chances away”.

“I hope for a world where everyone lives in peace and harmony”.

A cameo theatre-in- education role was conducted at the Suggate Tree on the corner of Soldiers Avenue and Marmora St.  Local Soldiers Avenue resident, Wendy Machon played the role of William “Billy” Suggate’s mother, Mary, who planted the tree in 1925.

Suggate died, aged 19, a century ago, in the battle for Passchendaele, Flanders, Belgium.

As “Mary” explained, “Dad and I were never able to visit where our beautiful boy was buried. We shared our grief with dozens of our neighbours. With so many sons and husbands lost, we needed somewhere to grieve. Many towns and villages came up with the idea to plant a special tree for each soldier’s memory. Our good friend, Mr. Holloway, donated the trees in this memorial street from his nursery. This is our Billy’s memorial tree, planted on this corner by Dad and I.

It didn’t need to rain; our tears did that.”

CONTAINER RECYCLING SCHEME OFF TO A SLOW START IN FRESHWATER

The State Government has embarked on the roll out the container deposit scheme across the northern beaches. However, there are very few reverse vending machines to cope with the demand and only 16 shops on the northern beaches allocated as collection points.

In Freshwater, only Polar Bar on Harbord Road is so licensed.

Soft drinks, juices, flavoured milks and bottled water have all gone up in price, while a carton of beer has increased by $4 a carton due to the introduction of the scheme. An apparent short term windfall for the bottlers.

Friends of Freshwater is a strong supporter of the Scheme due to the experience of plastics fouling the beach.

The poisoned Norfolk Island Pine in Kooloora Avenue, on which we reported last month, has been removed by Council. This tree had its roots poisoned by someone wishing to gain an unexplained advantage.  It will be replaced by a new pine in this heritage listed stand of trees.

We are still seeking further formal feedback on the first of our public art project pods…. the First Peoples Pod.

Many people have sought more information about the Aboriginal Artist who painted the pod façade. Leanne Tobin has worked as an artist for three decades. She is of Darug descent and grew up in Western Sydney. In 2011, Leanne won the Parliament of NSW Aboriginal Art Prize for her art work, “Defending Country”. She is currently the Artist in Residence at Blacktown Council’s Art Centre.

In response to a spate of anti-social behaviour at Freshwater beach which has involved under-age drinking, and widespread community concern, Northern Beaches Council and the local area Police Command have resolved to establish an Alcohol Prohibited Area to cover the beach reserves from Undercliffe Road in the south, the public car park adjacent to Freshwater Beach extending to Ocean View Road.  In addition,

An Alcohol Free Zone will be established for Freshwater Village to included public roads, footpaths and carparks within the area from the corner of Oliver and Lawrence Streets through to the junction of Albert St. and Ocean View Road. Police assert that these are needed public space management tools to combat anti-social behaviour associated with excessive consumption of alcohol.

Freshwater resident, Tim Trumper, has recently been appointed Chairman of the NRMA after being a Board Member since 2014. His Board responsibilities as a Director in that period have included the Northern Beaches, where he has been active in a wide range of motoring issues. He has been vocal on upper age driving limits and has stated that “our view is that there is no driver upper age. It’s about your driving ability and your awareness of that ability”

Tim is closely monitoring new motoring technologies such as the introduction of driverless cars and alternative fuel sources.

One of the downsides of sky-high real estate prices is that the assessed value of property keeps rising, as do rates and taxes.  Landlords have to pay these increased costs and often pass them on to tenants in the form of higher rents.

In Freshwater, a real estate hotspot, commercial rents are inordinately high.  This has led to a number of shops becoming vacant and remaining unfilled for lengthy periods. Something has got to give.