The recent poisoning, in late 2017, of one of the 22 Norfolk Island Pines along both sides of Kooloora Avenue is indicative of the increasing tension between individual and community amenity. The tree died in quick time, and Council, at substantial cost, was forced to remove it. A new, mid-size tree, has just been planted as a replacement (see picture attached). 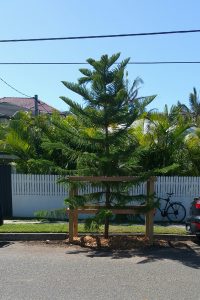 This stand of heritage-listed trees was originally planted by Harbord Public School children in 1936 as part of an Arbour Day Program, which enabled street trees to be planted throughout Harbord. Long standing local residents such as Keith Sterland, well remember planting Street trees while at School.  Arbour Day is now known as National Schools Tree Day, and is held on the last Friday in July each year. 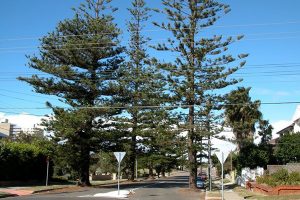 Kooloora Avenue has Freshwater Creek running to the ocean along its northern side.  The Creek is now encased in a Storm Water pipe.  These trees would have thrived on the additional moisture provided by the creek.

Norfolk Island Pines are a common feature across the east coast of Australia.  According to famous botanist, Joseph Maiden, who wrote about them in “Flora and Fauna of NSW “in 1902, these trees, apart from providing shade, revel in the sea air, have narrow leaves and a conical shape that offers little wind resistance.

“Kooloora” is said to be a local Aboriginal word possibly meaning ‘fresh water’. The Avenue was previously named Freshwater Ave until Council changed the name in 1932.

The heritage listing of these trees was, in part, based on the fact that they are socially significant as plantings by the local school. Although some are in indifferent health they are a prominent visual element in the Freshwater Beach area & are representative of seaside plantings & association with recreation/holiday themes.

Developments in Freshwater often raise questions of the suburbs’ heritage. Here are the 16 sites that are currently listed as local heritage sites.

Recent renovations to the heritage-listed Harbord Beach Hotel (aka “the Hilton”) have included a return to the white liverage first used in 1928. For much of its recent life, it has been painted a predominant sand colour.

The Harbord Literary Institute is in its 100thyear of operation, and as yet the community has heard nothing from Council as to any proposed celebration of its longevity.

With its organising committee disbanded (a casualty of the Council amalgamation) there is no capacity for the community to have any input. This is left to anonymous “Asset Managers” who administer the premises.

In 1918, it held many “Welcome Back” functions for local returning service personnel from the war fronts of Europe.

WHAT USE THE VACANT EARLY CHILDHOOD CENTRE?

Mums and their new born children are now forced to seek early childhood services in the multi-storied bun rush that is the new Brookvale Community Health Centre, adjacent to Warringah Mall.  This involves finding parking in the Complex and getting to the designated floor of the building with pram and necessities. Needless to say that young Freshie mums are scattering to other nearby suburbs for their mothers’ groups rather than using this facility.

The Mounties Headland Site is nearing part completion with some residential accommodation and a day care facility soon to be occupied. Work is continuing apace on other areas and the excavation for the swimming pools/gymnasium/ residential tower, is well underway.

At the completion of this project, attention will revert to the other Mounties Group asset in Freshwater, the Waves Youth Facility.  This site was established by members of the Freshwater community via the Harbord Diggers Club. It was meant to be a lasting gift to the youth of our community.  With the quiet removal of the site from the core business of Mounties, its Board is apparently free to use or dispose of the asset as it wishes.

Of course, with a burgeoning youth population, a revitalised youth centre would be welcomed.

Congratulations to the 70 concerned residents who have lodged submission against DA’s that if approved will determine the future character of Freshwater Village. These DA’s are currently being assessed by Council.

Two DA’s lodged in late December 2017, for construction of 35 apartments on vacant land behind the northern side of the Village. This land, now zoned commercial, had never been built on and one of the blocks was owned by the one family for the last 70 years. It recently sold to a developer, IPM Holdings, which immediately lodged a DA. These blocks are uncomfortably close to the Harbord Electricity Sub Station and its 14 KV transformers and magnetic fields.

One DA (2017/1287) proposes 24 bedrooms to be located 3 metres from the Sub-Station, and we are of the view that this is unsafe, unhealthy and poor urban planning.

Submissions against the Developments have mainly been on the grounds that the residential accommodation is accessed by driveways that flow onto busy Lawrence Street. This is in contravention of the Freshwater Village provisions within the Warringah Development Control Plan. There is also no underground parking for visitors or retail customers as there has been with other Village developments.

These DAs will take much, but give little to the community or the Village in return. Needless to note that there has not been one submission in support.

Interestingly one Development Applicant, IPM Holdings, has purchased the former Anglicare site in upper Wyndora Avenue and is currently selling its town houses known as “the Pavilions”prior to completion in June this year.

During this DA process, we discovered that only a small number of surrounding properties were being notified of these DAs.  Of particular note was the adjoining Kahana building in 18 Marmora St., which has its western wall abutting the proposed development. The newly installed residents were not notified, even though the development proposal affects them mightily.

For development proposals of such controversy, widespread notification would have been the norm. Once upon a time the community was letterboxed, and then it was reduced to 300 residences, and now it is a mere 79 properties being notified.

FOF is raising this with Council as it appears that Developers are seeking to have minimal notification by treating these DAs simply as “Alterations and Additions”.

Friends of Freshwater has written to Ausgrid on 14 March asking it to fully wall its open-air sub-station. We are of the view that the time has come for a public safety approach to be taken to the radiation emissions from the site. These should be isolated by the construction, on 3-sides of the site, of a brick wall lined with metal to ensure that emissions are contained and earthed. Gone are the days when a simple wire fence and precautionary signage will suffice.

We are yet to receive a response.

2018 Memberships of Friends of Freshwater are due for renewal.

If you are thinking of becoming a member of FOF, or simply renewing your membership, then hop on line to our website at www.freshie.org.aufor easy subscription.