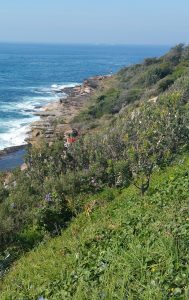 At its last meeting on 22 May, Council approved its Freshwater Coastal Space Master Plan.

A summary of the changes made since the draft plan are on our home page for your reading.

It should be noted that the Beach Reserves have not received any attention from Council since the 1980’s and there are areas of great neglect. Playgrounds are run down, public toilets outmoded and walking tracks eroded.

Many proposals in the Draft Plan, which caused great community concern, have either been removed or modified.

Council approved the conversion of the overflow car park (formerly an in-filled Freshwater Creek) to be officially a car park. This had some opposition from some locals who wanted to see it retained for occasional recreational use.

The Board Walk Missing link has been resolved with its extension from Lumsdaine Drive through to Mckillop Park and thence to the northern end of Freshwater Beach at Ocean View Road. The Walk will be constructed along the rock platform so as to not disturb a healthy stand of native vegetation. This was a great win for bush regenerators. Russell Beardmore, Tanya McAllen and Harry Eliffe who raised their concerns with the draft proposal directly on site with the Mayor and senior management.

New Public toilets have been proposed for construction on the western end of the Surf Club.  Likewise, new playgrounds are proposed to replace the existing two that are antiquated and too close to roads and passing traffic.

There will be a pedestrian footway up Bridge Road to the Queenscliff Steps as another part of the Coastal Walk connection. Pavilion, Undercliffe and Freshwater View Reserves are also specified for upgrading.

Overall the Reserves precinct will gain an extra 35 car spots from the proposal and maintain green space in largely its current configuration.

The Coastal Walk extension looks to be first cab off the rank for construction work. This will be paid directly from the amalgamation funding provided by the State Government.

WHAT IS HAPPENING AT THE “FRESHWATER” (FORMER GROWERS SITE.)

Hindmarsh Constructions has completed its construction of the Apartment and retail building in Albert St., for its Mosman-based developer, FW Projects, but everything has seemingly come to an abrupt halt.  The building was set to be completed in June 2017 and is now a year behind schedule.

Are there structural defects, which need to be rectified before the building can get its Occupation Certificate from NBC?  Is there a contractual legal impasse? No prospective retail tenants are fitting out their premises nor have apartment owners moved in.  There is an eerie silence about the building, and the Duke senses that the only apparent activity is that of dollars burning. Spare a thought for those who bought off the plan and are constantly rearranging their lives to cope with the delays.

The changes to legislation which now mean that all construction defects have to be rectified before an Occupation Certificate is issued by Council are apparently at the heart of the delay.

Of course this has a more than passing interest to other businesses in the Village who are waiting upon an uptake of passing pedestrian traffic.  “The Freshwater” has provision for 62 parking spaces for its retail customers. The previous Growers had 35, so this will be a big boost to the Village when the complex opens. One hopes that it is sooner rather than later.

FLANNERY’S WHERE FOR ART THOU

We reported on the prospect of the organic food retailer Flannery’s taking up a leasehold in the Freshwater Village Plaza. A hitch has apparently occurred as to the extent of Flannery’s liverage on the side of the building.  Flannery’s were seeking near total coverage, which would have prevented other tenants advertising their presence.

Apparently the impasse is close to being resolved.

Vodaphone is currently installing a 4G Tower atop the Polar Bar two-storey building at 87 Harbord Road. The immediate community has not been consulted, and Vodaphone merely sent a letter to Council on 1/12/17 indicating its intentions, and mentioning that it was placing an advertisement in the Daily Telegraph, with a 10-day turnaround for the community to raise any concerns.

This has distinct echoes of the OPTUS Mckillop Park Tower fiasco and the Friends of Freshwater thought that we had overcome the sneaky approach of Telcos to proper community consultation.

The protocol developed included proper notification of the community plus the lodgement of a DA so that the normal planning processes would apply. Vodaphone is now hiding behind the Federal Telecommunications Act to justify its actions.  Although we thirst for mobile data capacity, this is not the way to achieve it.  4 Towers were meant to be on the roof of tall buildings not small residential buildings with no EMR measurements undertaken. We need to stop this blatant disregard of the community.

Developers currently have two DA’s before Council for development of residential and retail accommodation on land that has never been developed before. Both IPM Holdings, who recently purchased a large, long held-block, from the Roberts family, and neighbour, Francis Kim (proprietor of the recently expanded Hiro’s Restaurant) now have applications being assessed by NBC. The Friends of Freshie has found significant deficiencies in both these applications including close proximity to an ever expanding source of Electro-Magnetic Radiation from the AUSGRID sub station, and various non-compliances with the LEP and Freshwater Village DCP. Both seek access to their developments from Lawrence Street when access from the rear should have been sought. In both cases, these DA’s are opportunistic.

DA2017/1287 proposes 20 bedrooms in close proximity to the sub-station fence. There is a probability that some of these might be occupied by children and for them the possible risk of exposure is elevated.

We think that this is not worth the risk and is indeed poor urban planning. Fortunately, Council’s Environment Health section has recommended refusal. This is on the basis that” the applicant provides details of the long term effects of EMF and how exposure will be addressed”.

n its submission to this DA, AUSGRID advised that the development be no closer than 3 metres to its boundary, which would severely compromise the viability of the development.

Both developments have been in the process of Council assessment for months and are problematic. If a panel process is convened, Friends of Freshie will be there to raise its concerns.

Freshwater Village Back Precinct includes the Literary Institute, former Baby Health Centre, Guide Hall, Waves Youth Centre (now a temporary Gym). The 5-story Telstra building (which is used as a de-facto telecommunication tower) and the Ausgrid Electricity Sub-Station, as well as two land holdings at the rear of Lawrence Street. There is also the Oliver Street car park, which is zoned for community use.

Friends of Freshwater has written to Council seeking place management emphasis on the precinct, given that it is both a prominent landlord as well as the consent authority for the Village.

The unique Harbord Literary Institute is in its 100thyear of operation, and it is unclear as to what Council is planning for any proposed celebration of its longevity.

With its organising committee disbanded (a casualty of the Council amalgamation) the usual planning has not occurred.

WHAT USE THE VACANT BABY HEALTH CENTRE?

Mums and their new born children are now forced to seek early childhood services in the multi-storied bun rush that is the new Brookvale Community Health Centre, adjacent to Warringah Mall.  This involves finding parking in the Complex and getting to the designated floor of the building with pram and necessities. Needless to say that young Freshie mums are scattering to other nearby suburbs for their mothers’ groups rather than using this facility. DID THE DEPARTMENT OF HEALTH THINK ABOUT ITS CLIENTELE  AND THEIR NEEDS?

NEW DIGGERS SET TO OPEN BUT WHAT IS FUTURE OF WAVES CENTRE?

The Mounties Headland Site is nearing part completion with some residential accommodation and a day care facility soon to be occupied. The impressive new Club will officially open its doors on 30 June and there is a gala occasion being held beforehand on 28 June. Work is continuing apace on other areas and the excavation for the swimming pools/gymnasium/ residential tower, is well underway. Soon a massive number of concrete trucks will begin deliveries in order to lay the foundations for the second stage.

At the completion of this project, community attention will revert to the other Mounties Group asset in Freshwater, the Waves Youth Facility.  This site was established by members of the Freshwater community via the Harbord Diggers Club. It was meant to be a lasting legacy and gift to the youth of our community.  With the quiet removal of the site from the core business of Mounties, its Board is apparently free to use or dispose of the asset as it wishes.

Of course, with a burgeoning youth population, a revitalised youth centre of the kind that was previously operated and staffed by the Harbord Diggers would be well-received by the community.

JOIN the Friends of Freshwater in 2018.

If you are thinking of becoming a member of FOF, or simply renewing your membership, then hop on line to our website at Membership link for easy subscription.