William Gocher, a founding editor of the Manly Daily, would be turning in his grave. His newspaper, owned in recent decades by News Limited under the guise of Cumberland Newspapers, after more than a century of publication, has suspended its operations, citing the impact of COVID-19.  Faced with declining advertising, it had gone from being published 6 days per week and then to twice per week, and now behind a paywall on line. Its Rounder network, which had provided a very useful, part time job for many, was wound back. More recently editions were simply thrown at houses, in all weather, from a passing vehicle or delivered in bulk to early morning businesses such as coffee outlets and cafes. This final edition illustrates its frailty. No news, no journalism and no substance.

Yet in its time it had wonderful journalistic contributions from people such as Marj Bellissis, John Morcombe, Kathryn Welling, Tom Mead, John Geddes and even Freshwater’s Graham Knox (aka “ The Zom”) who wrote enthusiastically about local surfing and rugby league.

Why would one pay money to subscribe to it on line? We will get our local information from other sources including the periodic Peninsula Living and Covered magazines.

A prominent 103-year-old obelisk erected on a rocky outcrop above North Curl Curl Beach has been seriously damaged in a wanton act of destruction.

This monument was erected in 1918 in memory of 10 local soldiers killed in World War 1. The monument was made by Mr. C. G. Martin, who also designed and made the accompanying marble tablet. He was assisted by local resident, “Unk” Robertson, and several other surfers of Curl Curl. It was built of concrete, and stands on a large rock base above sea-level, overlooking the spot where these soldiers used to spend their week-ends. The cement for the monument was carried by hand from Manly, and around to the beach, by Mr. Martin and others, that being the only means of getting it to the site

According to the Sun Newspaper of 12 May 1918, “The monument can be seen from the open sea by passing ships, as it stands out boldly on the cliff”.

Our Local Member, James Griffin, who has responsibility for Veterans Affairs, has already stated his determination for it to be immediately repaired as Anzac Day 2020 is soon to occur.

HOW IS YOUR F.O.F. EXECUTIVE FUNCTIONING DURING THE CORONAVIRUS PANDEMIC?.

Like many organisations and schools, the Executive of the Friends of Freshwater is meeting on a regular basis via Zoom on line.  Our various projects including community gardening, bush regeneration, and meetings have been curtailed but we have been getting on with our list of objectives for 2020 (see these at the tail of this newsletter) 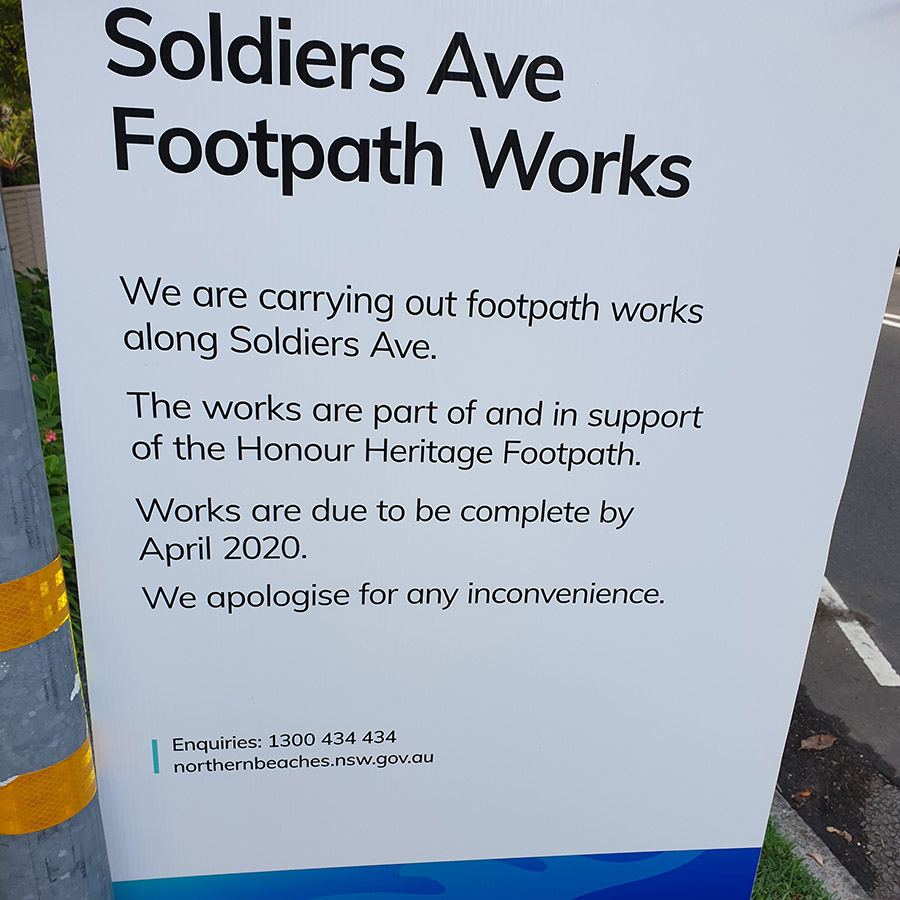 Northern Beaches Council, as part of its strategic Walking Plan, has now completed a footpath on the northern side of Soldiers Avenue, from Harbord Road through to Oliver Street.  A further section of the Avenue has also been completed from Harbord Rd through to McDonald Rd.  This now equips this busy roadway with footpaths, on both sides, for its entire length.

Our community is again to be commended for its 256 submissions to the public consultation phase of the Walking Plan, dwarfing any other submissions from across the northern beaches. The weight of these submissions could not be ignored by Council. 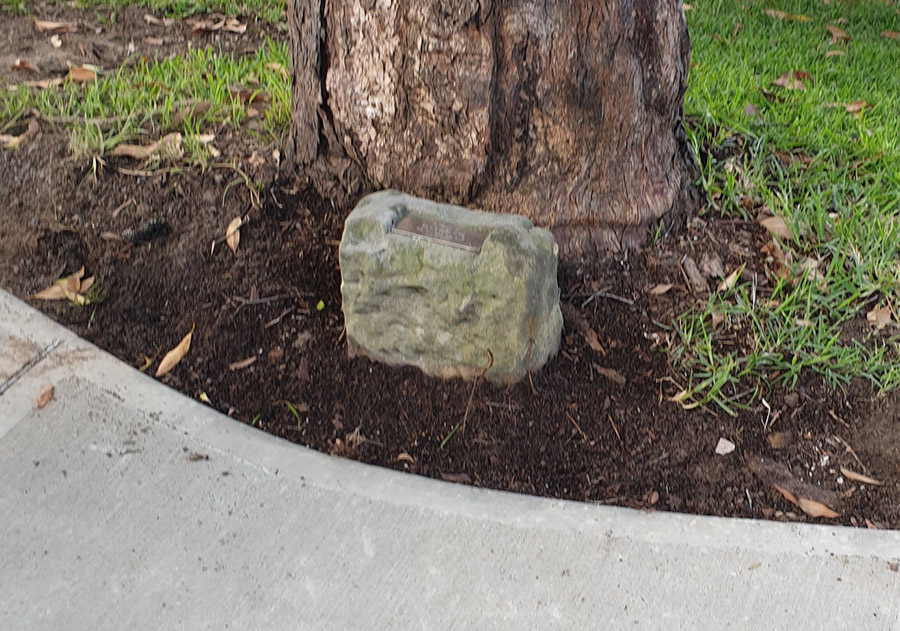 Of course, the major objective of this footpath, apart from pedestrian safety, is to provide a platform to showcase the historical aspects of the Avenue of Honour and particularly the service by local residents in conflicts post WW1. Through the work of the Soldiers Avenue Stakeholders Group, in the lead up to three recent centenaries (Centenary of Anzac,2015: Centenary of Armistice,2018; and the Centenary of the Soldiers Avenue of Honour,2019;), we have been able to unearth valuable information on a large number of families of those who served in these international conflicts. 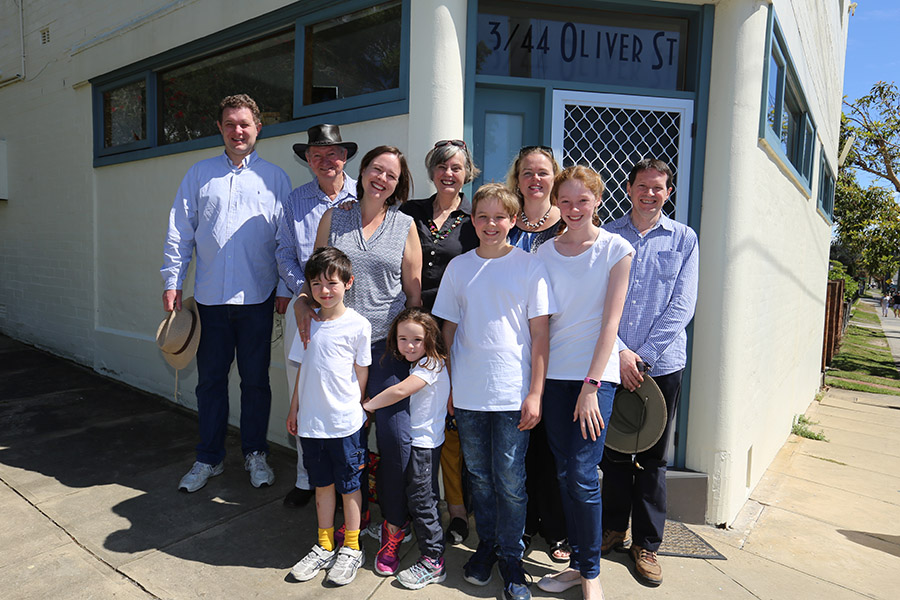 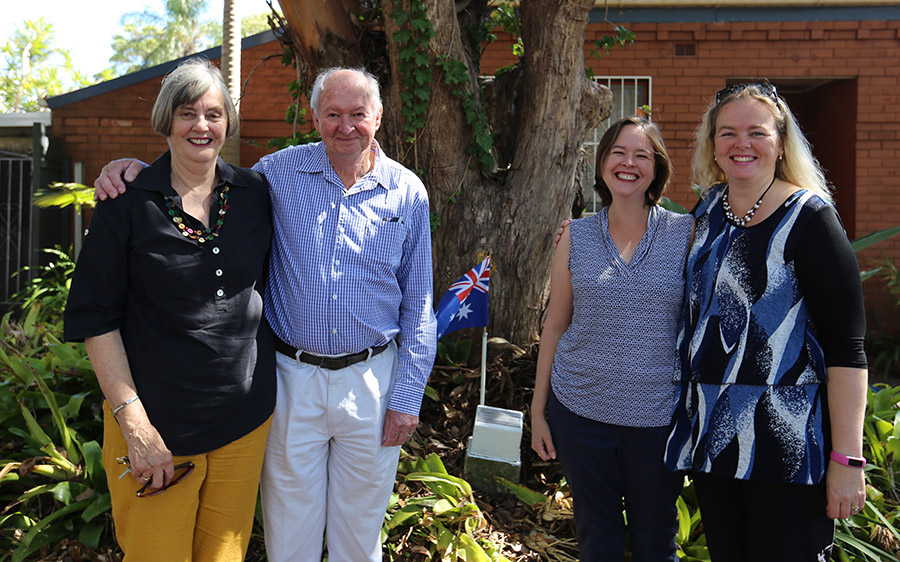 One such example is the Christianson family, who came together in 2018 to pay respect to their relative (see photo, Frank, who was killed in WW1. His memorial plaque has long resided on the northern corner of Oliver Street and Soldiers Avenue, next to the house which his son, Frank Junior, built, and beside a now towering Brush Box tree.  After Frank died in WW1 , his widow, Leonie,  raised her children in a house with a shop, one block away on the corner of Surfers Parade and Oliver Street. She operated the shop for many decades and was well known in our community.

Our community is still grieving over the death of one of its well-known residents, Tony Plati, after he was struck by a vehicle while walking to visit his elderly mother on Oliver & Brighton Street, Freshwater, around 5.45.am, on February 22. The vehicle, inexplicably, did not stop and Plati was found lying, near death, on the side of the road. Attempts were made to revive him, but he died in hospital. His wide network of relatives and friends has been left struggling to understand what happened in his final moments. Police are continuing to investigate the matter.

We are able to report that the lessee of the proposed IGA Supermarket, ‘Vasili Karellas’ along with a small team, has been sighted on a number of occasions with keys opening the doors of the long empty, 1200m2, retail space. A fit-out could be imminent, but again we are unable to provide any definitive date on a supermarket for Freshwater.  The sounds of silence are still like a cancer growing. This, the more so, when supermarkets are doubly needed and doing great business and community service, during the hiatus of the COVID19 pandemic. Staffing of this supermarket would provide a great opportunity for many locals who have suddenly lost jobs.

A BIG SHOUT OUT TO OUR NIMBLE FRESHIE BUSINESSES

The lockdown provisions have presented a massive challenge to our Freshie businesses and some have been forced to close but their staff will have the advantage of the Job Keeper stimulus package at the end of April.

Others, and particularly our cafes and restaurants, have rapidly converted to a takeaway situation. Stowaway Bar, which co-ordinated a magnificent bush fire fund raising effort at the Harbord Bowling Club, only a short while ago, has immediately developed a takeaway business of pizzas, cocktails and other menu items. The new owners of the Harbord Hilton have converted its drive-in bottle shop to selling a wider range of items. Cruise Espresso is now selling fruit and vegetables as well as takeaway coffee, juices and food.  Wild Forager has gone online but one can still order flowers at the front door.  Nearby Albert and Moore has opened its window for takeaway coffee and food orders.  As usual, the “Captains” convenience store has been stocking a remarkable inventory of convenience items. The newly established Freshie Mex has been doing a bustling takeaway trade including margarita cocktails. Other businesses, such as Mrs Jones, the artisan baker have become part of on-line food offerings such as bundlfresh

All businesses and particularly those where queues for service are inevitable, have had to install physical distancing markers. Mark, the Gourmet Butcher, is delivering meat to the door, as is the Balgowlah-based Harbord Growers with fruit, vegetables and deli items. Andy, our fishmonger, continues to provide fantastic seafood at his shop in the Village with physical distancing measures installed.

Needless to add that our Pharmacist, Martin Brook, has been inundated with requests for pharmaceutical items.

Members of the Friends of Freshwater have also observed Council Rangers and Police enforcing these physical distancing orders.

Reassuringly these measures are having a great impact on curtailing the spread of this insidious virus on the northern beaches where it has been somewhat of a hotspot.

With Anzac Day ceremonies cancelled for 2020, there are proposals to mark Anzac Day with renditions of the Last Post from one’s front fence.  Brass players of Freshwater unite.  The proposal is that the Last Post will be played at 6am, as it would in a normal dawn ceremony.

Also another idea is to place a bunch of rosemary on one’s front fence as a silent mark of respect.

Random acts of kindness are breaking out all over Freshwater as we discover people who have lost employment, or struggling with the rent or are isolated or are going through a rough patch. Let’s continue this commendable trend as we all struggle through this enforced period of lockdown.

FRIENDS OF FRESHWATER OBJECTIVES FOR 2020