Friends of Freshwater Inc recently was closely involved with the planning for the Shared Bicycle/Pedestrian Pathway as it proceeded to Freshwater Village from Manly Village via Queenscliff Road, Crown Road and Dowling St.  and particularly as it passed through Crown Reserve and alongside Freshie Community Garden.  This pathway has now been completed and has become a well utilised route. The concerns that we raised at the time were resolved by effective consultation.

This revised set of proposals seeks to continue the Pathway through from Freshwater Village to Curl Curl via the major road artery, busy Oliver St. It currently caters mainly for motor vehicle traffic and pedestrians.  Bicycle Traffic is more problematic especially for a younger population that seek to get, to and from, two public schools or to the Freshwater Village or the Beach.

If this initiative, in whatever eventual form, is implemented, it will enable safe bicycle travel from Manly to Curl Curl via dedicated pathways

In general, we are in favour of enhanced, safe and functional bicycle pathways that do not interact with local traffic or at squeeze points.  This is a major government policy being implemented across Sydney whether it be in the CBD of Sydney or in suburbs and it coincides with the rapid take up of bicycle transport (including e-bikes) during Lockdown. It is also, sadly, set against a higher injury and death rate to cyclists in interactions with motor vehicles

In Freshwater, it is apparent that there is a noticeable trend towards E bikes and to a lesser extent E-scooters. 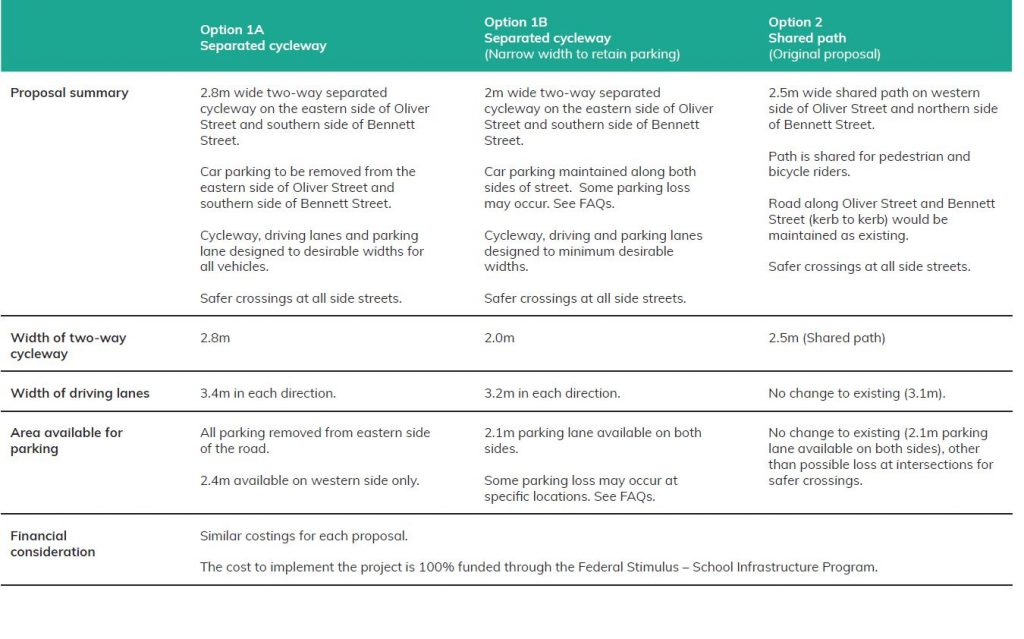 The Friends of Freshwater is in favour of a hybrid of both Options 1A and 1B. We do not favour Option 2 for a pathway on the western side of Oliver Street.
The hybrid option that we propose is based on 1a with a width of 2.8m along those stretches of Oliver Street where there is no residential housing. This includes the area from the Harbord Literary Institute to the Waves building and for the area beside Jacka Park. It would also include the area of Oliver Street beside Harbord Public School and the area beside the Brighton Road shops.  All other areas would have the reduced width of 2.0m and with street parking.

We note that the Street Parking concerns raised by some submissions are somewhat weakened by the presence of large caravans and trailers, that appear to be permanently parked.

For six years we have been waiting with increasing impatience for a local supermarket. It has been hard not to feel cynical about whether it would ever happen. Our community has been held in a state of suspended animation for way too long. When an opening date was posted, some would only believe in its reality when they were pushing the trolley done the aisle.

During those six years, the “Supermarket Saga” was like a series out of Netflix with its cast of characters, liquidations, “phoenix” construction companies, ground water problems and lengthy court cases to recover monies owed.  Finally, on 24 November, it was the Karellas Bros that were able to open the doors of the new Supermart.

What was revealed on opening day was a relatively large, well stocked retail supermarket, employing 50+ locals in pleasant working conditions.  The aisle width passed the wheel-chair test and many customers were assessing the diversity of stock and were well pleased with the offerings. The hours of opening, from 7am to 10pm, 7 days per week were a welcome benefit given that its predecessors closed at 6pm.   The Supermarket has two floors of underground parking with a lift directly into the store.

The nearby Captain’s Convenience Store, which has been the main go-to during Covid and before, and while it will have some competition, it should be noted that the Captain’s store has provided a wonderful service to the community over the last 6 years  and has expanded its stock to cater for community needs. We hope the community will embrace both options. 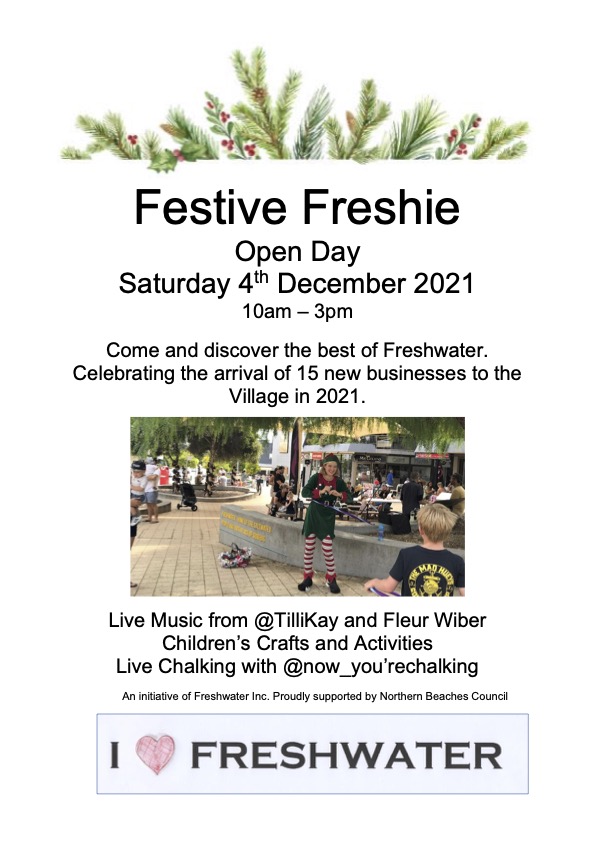 Coinciding with the Supermarket Opening was a main Street Festival called “Festive Freshie” to reinvigorate the Village with festive activities. Organised by Curl Curl Ward Place Manager, Deborah Richardson-Bull along with local dentist, Trevor Sargeant, (who is also chair of the local Freshwater Community Bank and Santa on the Saturday) and local landlord, Frank Minnici.  There were games for children, chalk art and musicians and candy provided by Santa and his elves.  All the local businesses were allowed to trade on the footpath and the local bank opened in “event” rather than “banking” mode on the Saturday. Pop-up businesses were allowed to trade in the bank precinct.
The initiative was well received by the community as we come out of Lockdown and restrictions.

AFFORDABLE HOUSING FOR “OVER 55” WOMEN AT RISK OF HOMELESSNESS

At last something is being done about this confronting issue of homelessness for more senior women. A DA has been lodged by the NSW Governments Landcom to spend $11m to convert the former Queenscliff Community Health Centre into a mixed housing development. It is planned for 37 dwellings of which 31 will be studio apartment, 4 one-bedroom and 2 two bedrooms. A minimum of 12 of these apartments will be reserved as affordable rental housing for women over 55.
Women in this age group are the fastest growing cohort experiencing homelessness in Australia.

FRIENDS OF FRESHWATER INC OBJECTIVES FOR 2022

Mounties Group recently sold the former Waves Youth Centre for a rumoured amount of $9m+. It was sold prior to auction to a local investor.

We had registered our concern for the future of this facility and its importance to the youth of our community. Our Curl Curl Ward Councillors were doing likewise. Recent demographic data reinforces the fact (already in evidence with Harbord Public School having more than 1100 students) that the youth of our community are likely to become its biggest segment.  Sadly, this fell on deaf ears and an opportunity was missed.  It is clear that only money talks.

The efforts of former Diggers Club members, Harry Knox, Bill Messenger, Mackie Campbell, Oakey Hammond and others, that got this Youth Centre established, were ultimately neglected. It was to be their legacy to our community.  The families of these fine individuals, who still reside in our community, will be dismayed by this shallow, corporate decision by a registered club charity.

When sold, the building was in a state of disrepair with the roof leaking profusely making it unsuitable for tenancy. It had not been maintained for some time.

MORE BRONZE PLAQUES INSTALLED IN THE SOLDIERS AVENUE OF HONOUR

With the ongoing support of local organisation such as the Harbord RSL Sub-Branch and the Surf Club, Friends of Freshwater has been able to secure further State Government funding for recording in perpetuity the service of deceased residents who served in WW1. These include Stephen Raffo, Nurse Alice Le Messurier, Malcolm McPhee and Ernest McMahon.

Take a stroll down Soldiers Avenue and read their stories cast in bronze.

This Reserve is located on the southern headland of Freshwater Beach and is a major gateway access to the Beach from the south.  Its existence came about as a result of a community outrage against a proposed development which would have enveloped the site with apartments.  Warringah Council rejected the DA but allowed a 3 storey, medium density dwelling at the top of the site. The land below eventually came into the care and control of Council and was subsequently named Undercliffe Reserve.

At the time Council rejected a community request to name this Reserve, the Irene Crump Reserve, because Mrs Crump was still alive. In fact, she lived a long life and died on 11 March, 2012, aged 91. Although, at the time, it did agree to the installation of a plaque which read: –

‘THIS LAND WAS PRESERVED AS A PUBLIC RESERVE LARGELY DUE TO THE EFFORTS OF IRENE CRUMP, PRE-SCHOOL DIRECTOR, RESPECTED LOCAL CITIZEN DEDICATED TO THE WELFARE OF CHILDREN’ 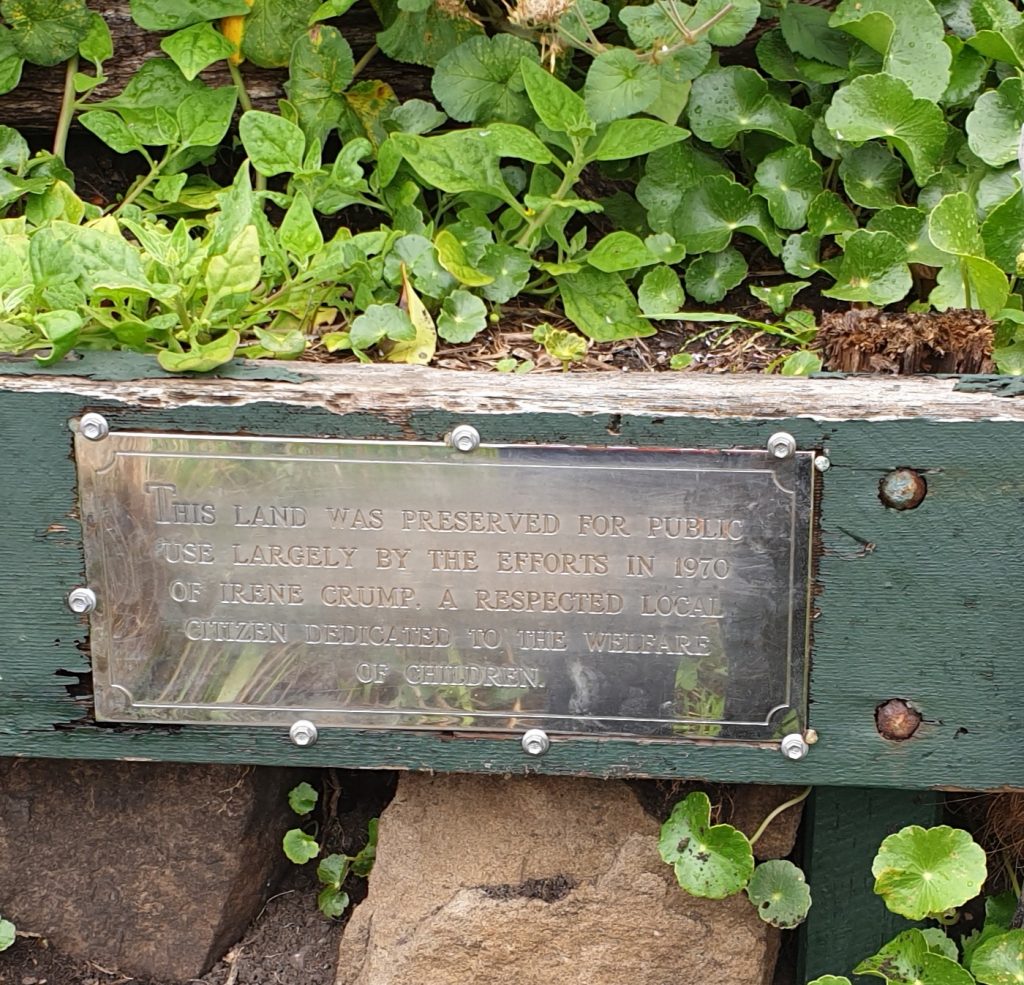 The community outrage against this development was led by Mrs Irene Crump who was Director of Harbord Community Pre-School for more than two decades.  Mrs Crump was a community activist and environmentalist who would take a generation of children on excursions down to the Beach.   She is still remembered with great fondness by the Freshwater community, many of whom were then either parents of students, or students.

Her efforts are encapsulated in the attached media article.

This DA, along with other controversial building developments in the then Harbord area, led to Warringah Council being put into Administration for the first time.  It also led to the promulgation of a new Local Environment Plan to ensure planning loopholes would not be exploited. This LEP was further refined in 1996 and again in 2011. 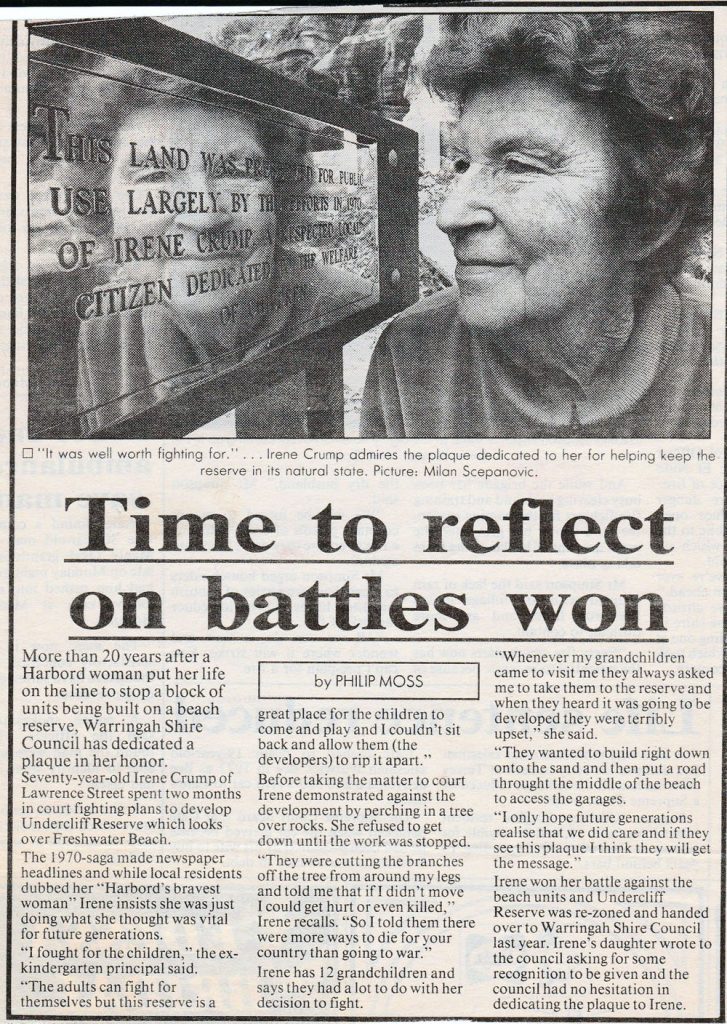 Restore All Freshwater Class Ferries to the Manly Run!! 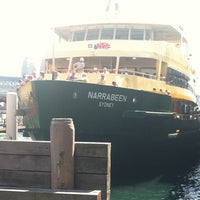 The Recent announcement that the Narrabeen will be refurbished and restored to the Manly run is great news, but why did it take so long to make this decision?

Now for the Queenscliff.

50 LAWRENCE STREET DEVELOPMENT HAS BEEN APPROVED BY COUNCIL 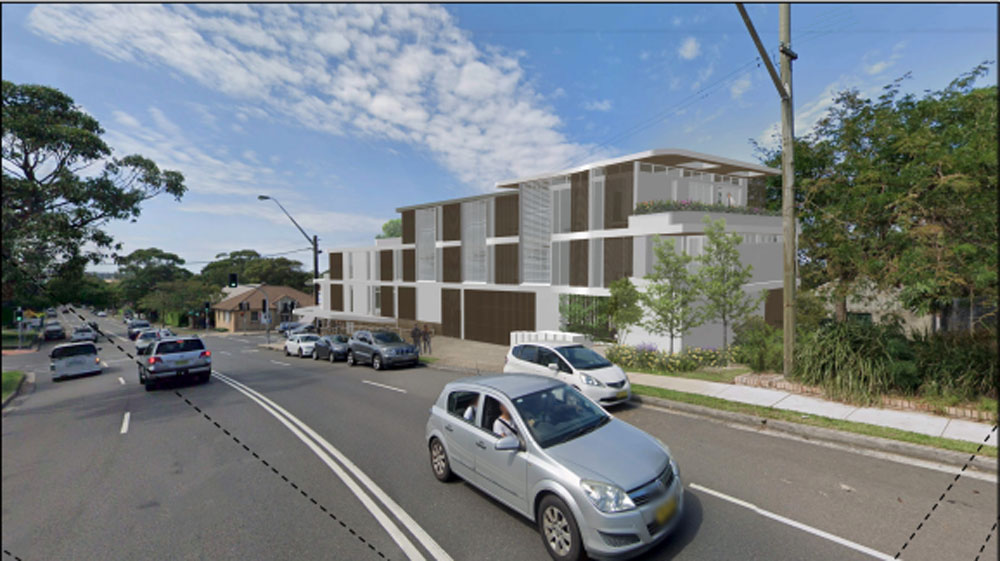 A Brookvale developer has won approval for a contentious and controversial development atop one of the highest points in Freshwater. This DA was consistently opposed for what Friends of Freshwater founding member, Phil Curry, described as “a bulky and poorly designed residential apartment building with a very small commercial development”.

In our public submission, we made the point that this was simply an apartment building masquerading as a shop-top development as required by the WLEP 2011. It paid little regard to the nearby heritage buildings of Lawrence Street and concentrates traffic movement around a busy Dowling Street intersection. It overshadows the next-door neighbour’s property.

The development was also assessed by the newly created Design and Sustainability Panel. It was given a tick of approval by this distinguished Panel but one has to question its sustainability given that the development has no water collection storage; no rooftop solar panelling; extensive glazing; no EV Recharging places, required a  bus stop relocation and no attempt at exemplary energy use.

We will live with this approved development for the next 50 years, and its presence exemplifies why we have to be vigilant with DA’s.

Membership is now available for 2022 and if you want to support our work for the community or have a say in decisions on various issues, then don’t hesitate to join us. It is a simple process.

COST OF RENEWAL IS $20 and can be done online via our website at www.freshie.org.au

As an apolitical community organisation it is important to maintain a significant voice in our community. Paid membership helps us demonstrate that we have community support as a voice for Freshwater, are a credible and duly registered entity and as such allow us to gain funding for important projects. 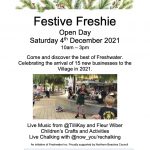