For many residents, the amenities provided by a Village represent a second home (or a third one, if you go to work).

Freshwater Village is clearly going through a transitional phase as two, major, main street, residential/commercial developments are completed. This has taken the best part of seven years and has been very disruptive to local businesses.  When the Harbord Growers closed in 2013 and subsequently moved to Balgowlah, it left a major void in the Village which has yet to be finally filled.  It primarily supplied fresh fruit and vegetables directly from Flemington Markets, and not from a western Sydney cold store as other supermarket chains do.

Many in our community fought against an enormous 2012 residential development which would have dwarfed the Village. Out of that came a Village Master Plan which prescribed height controls, setbacks, underground parking and laneway closures.  These planning controls remain in operation, even with the Council amalgamation, and all recent construction has had to abide by these provisions.

The current state of the Village in terms of shop closures and lack of services is in part due to the lack of a Village anchor tenant, as well as capricious landlord behaviour.  This should have been resolved in October 2017 when the 1200sq retail supermarket space was completed, but it has been mired in litigation and liquidation proceedings ever since. We understand that this will be resolved soon and a suitable supermarket will be operating by year end.

We are also stuck with a small number of village landlords, a few of whom are not very community-minded. This is not going to change. One landlord with extensive holdings has, for a number of years, been tolerant of empty shops or shops with short term pop-up enterprises. This emptiness and constant departures is disconcerting for the community who would want to live in a vibrant village with active pedestrian traffic.

This landlord currently has an approved DA for demolition and construction of  his mainstream properties ( unlikely to be built), and also has recently listed them for sale ( now withdrawn from sale). In a confounding manner, he is now repairing and remediating individual premises and residential holdings above.

According to a recent Manly Daily article of 28 September, he is now proposing a New York Style delicatessen as well as Italian,Chinese and steakhouse restaurants. Of course all of these require considerable expenditure on outfitting with grease traps and fume extraction systems. Those with long memories will instantly recall that his properties have previously housed a Chinese restaurant; the Bronzed Onion; Stowaway Bar; a quality butcher shop and a Vietnamese Baker. These proposals represent a ” back to the future” approach, and for these initiatives to be successful, tenants will need to have security of a 5/5 leasehold ,fair rents, leases without demolition clauses, and support for the permanent fit outs. 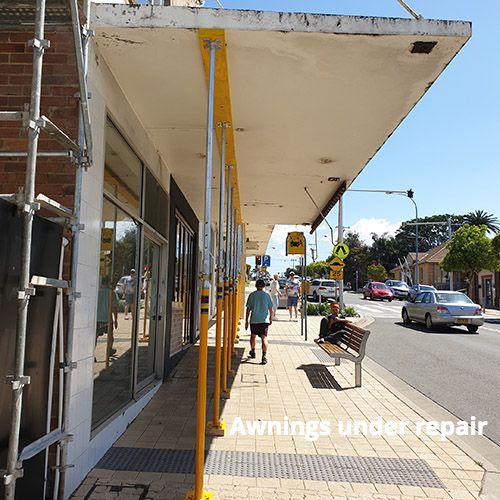 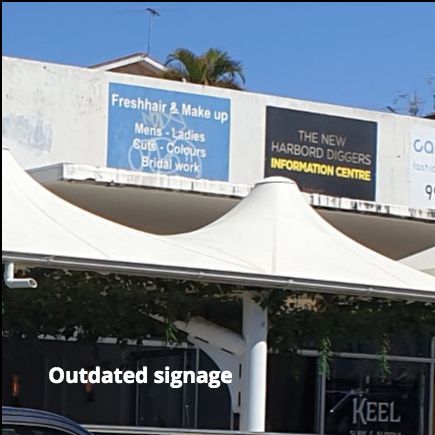 Council inspections have led to awnings on Village buildings being in need of repair or removal.  The Awning on the Robinsons building at the western end of Lawrence Street was recently removed without the guarantee that it will be replaced. The concrete awnings on the properties extending from Dowling Street appear to have extensive spalling from exposure to salt air and water. This spalling has the capacity to cause a serious hazard and they are currently temporarily propped.
A LITTLE BIT OF FRESHIE IN ‘DOWNTON ABBEY’.
The current cinema version of “Downton Abbey” is a reminder of Freshwater’s association with ‘Highclere Castle’, the setting for the film and the television series. 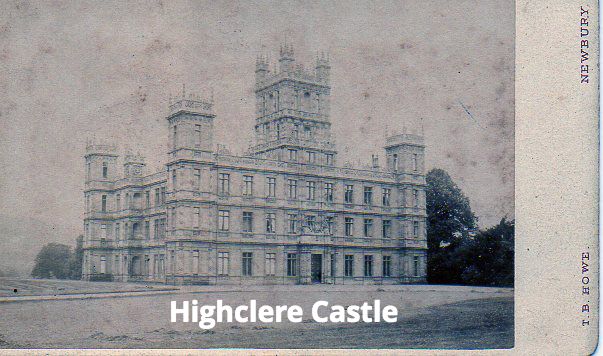 One of the pioneering contributors to the establishment of Freshwater, as we know it today, was the horticulturist,Charles Holloway. His guiding hand can be seen in the establishment of Harbord Public School, the Harbord Literary Institute and the Soldiers Avenue of Honour (for which he donated the distinctive Bush Box Trees) and the Tramway which found its way to Freshwater.
Holloway had emigrated from England to Australia in 1881 and married Henrietta Fells in 1883 Sydney. He was a horticulturist, being apprenticed at 14 as gardener at Highclere Castle, which was the country seat of the Earls of Carnarvon.  Highclere’s famous 1,000 acre park had been designed by renowned landscaper, Capability Brown.
(see photo from Old postcard C 1900 of Highclere found in Holloway family papers)
In Freshwater he set up a nursery business bordering Jacka Park and Eric Street, drawing its water from the nearby Freshwater Creek.This was very successful and later, with his sons, he would develop a bulb production business on land that is now the site of the Harbord Bowling Club. At one point this business was the biggest of its kind in Australia. Holloway Place, Curl Curl, is named after him.
Young Charles Holloway had a pretty impressive resume as a gardener before he arrived in Australia.  At one point he also worked on the estate of the Archbishop of Canterbury.
WHAT WILL BE THE FUTURE OF WAVES YOUTH CENTRE?
With the recent opening of the impressive new gymnasium within the revamped Harbord Diggers Club and the opening of the new swimming complex on October 9,
the Waves Youth Centre is currently dormant.
This Centre was a gift to the youth of our community from those our community who established this iconic Club. Legendary Harbord individuals such as Harry Knox, Mackie Campbell and Bill Messenger were closely involved in its establishment in 1986.When Mounties took over the Harbord Diggers Club, it quickly purchased additional assets such as the Youth Club site and the Sussex Inlet holiday facility for relatively token amounts. The Diggers Club was heavily indebted and did not have much bargaining power, whereas the Mt. Pritchard based Mounties was cash rich. Later, when acquired,Mounties Group moved these assets to non-core so that they could be dealt with in a way that did not require the full membership to vote on their future. This is the current situation and our community is rightly concerned as to the future of Waves, given that we have a tide of young people looking for outlets in a community which, other than Brookvale, has the least amount of green space on the northern beaches.
We need to be vigilant on actions taken by Mounties in respect of this site.
ONE OF OUR LAST SERVOS IS BEING UPGRADED
A servo which has been serving our community for near a century of motoring, is now being upgraded to meet the quickly advancing technology of motor vehicles. On the corner of Soldiers Avenue and Albert Street, it is a well located site and has seen many proprietors including the famous McPhee family that launched a national transport company from this site. Current proprietor, Keith Tucker, in renovating the site has found an old sewerage line running underneath as well as a large concrete plug designed to support a heavy vehicle hoist. The site should be fully operational again in the new year.
PUBLIC TOILETS IN A POOR STATE
Pity the people that need to go to a toilet in Freshwater, as it is a problematic experience. In Freshwater Village there is only one public toilet and it was built in the 1930’s and then only to serve the firemen from the nearby Fire Station. It has no hygienic facilities for men and is largely outdoors. For women it is little better but it does have hand washing facilities.
Private toilets in the Village often require a key from the local business.
In the southern Lawrence St., properties, the toilets are below standard and have not been upgraded for decades. the one exception is Little Collins Cafe which has a more than acceptable toilet facility.
At Jacka Park there is no toilet amenity but after lobbying by Friends of Freshwater this is about to change.
Likewise at Freshwater Beach the toilets located in the Surf Club which are often unsavoury, are to be renewed as part of the Beach Reserves Master Plan. They will be relocated to the southwestern edge of the Club. With as many as 10,000 people at the beach in the height of summer it is important that toilet facilities be of a high standard.
RV’S CAUSE A PROBLEM IN BEACH RESERVES
Freshwater attracts a significant passing traffic of surfers in RV’s as they move around the coastline of Australia. Unfortunately it is not well suited to this nomadic lifestyle given the fact that its amenities close at sundown and are not reopened until sunrise. Where to ablate in the intervening period. Sadly it is in the dunes or in the reserve. This is clearly unacceptable and recently Council has erected 12P traffic sites to encourage RV’s to move on promptly.